Modern people like to think that mankind controls nature, but sometimes the forces of nature remind us of their immense power in destructive ways. Recently, Haiti was the site of two such disastrous events. First, southwest Haiti was powerfully shaken by a 7.2-magnitude earthquake on 14 August, followed two days later by the damaging winds and rain of Tropical Storm Grace. The first attempts at recovery were hampered as the area devastated by one natural disaster was hit by yet another. The earthquake was centered in the mountainous Tiburon Peninsula in the southwest of Haiti. The largest city in that region is Les Cayes, one of Haiti’s major ports, known for its exports of sugarcane and coffee, which was devastated by the earthquake and then by the serious storm. 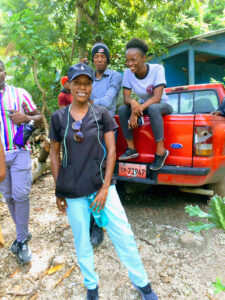 Many volunteers and humanitarian organizations rushed to this disaster-stricken area. Among them was a group of 20 university students from Faculty of Rehabilitation Sciences of Léogâne – of UNEPH, Université Épiscopale d’Haiti – who went to help in Les Cayes. Annabelle is one of these students, an NPH Don Bosco Program graduate who now wants to give back by becoming a physical therapist. She is 28 years old, having arrived at an NPH Haiti home in July 1993 after losing her parents. “I grew up in the NPH organization. I spent my entire childhood to adulthood there. The training, education, and values I received from NPH have helped me to develop my leadership and sense of responsibility, my spirit of service and teamwork, plus the sense of humor which allows me to collaborate well in a group and my community.” Annabelle wants to tell the members of the NPH family about what she witnessed in the disasters’ aftermath, describing the situation while she was still in Les Cayes.

Annabelle remembers clearly what she was doing at 8 AM on 14 August, 2021, the morning when the earthquake struck. “I was at home in the dining room, sitting in a chair reading a document on my computer related to my final project while listening to music. When the earth first shook, I did not understand what was happening. I stopped the music and wondered what was going on.”

She continues, “After a few seconds I understood that the earth was shaking. That’s when I yelled to my roommates to get out the house because we were being hit by an earthquake. Outside there were many neighbors, all were talking about the earthquake. Everyone was afraid to go back inside their homes, with memories of the deadly 2010 quake. That evening, all of us spent the whole night outside, afraid of possibly dangerous aftershocks.”

The news trickled in about the earthquake’s impact. It was a major event, with the epicenter about 125 kilometers (77 miles) southwest of the capital, Port Au Prince. The strong 7.2-magnitude quake has resulted in at least 2,200 deaths, with more than 12,000 people injured and over 130,000 houses damaged or destroyed. Highways, the electrical grid, water systems and other parts of the infrastructure also were badly damaged in the affected areas. The United Nations estimates that 650,000 Haitians currently need emergency humanitarian assistance.

Annabelle was moved when she saw the scope of the crisis and joined a group of physical and occupational therapy students from her university who traveled to assist the people of Les Cayes. The drive there was slow and difficult, with detours due to damaged roadways, mudslides and fallen trees. When they finally arrived in Les Cayes, Annabelle was astonished by the conditions she saw there. “The town of Les Cayes is seriously affected by the earthquake. Many houses have collapsed, most houses that remain are cracked and are at high risk of crumbling”, she says. The main water pipe was broken and flooded part of the downtown, so water for bathing and washing clothes is not available, and drinking water is only available for purchase.

Many victims were trapped when the earthquake knocked buildings down on top of them. At first, “there were people under the rubble who wrote on social networks, who kept asking for help,” tells Annabelle. However, no rescuers were able to come from government agencies. A few trapped people were dug out by family or neighbors, but the lack of equipment needed to lift heavy material meant that many trapped victims wound up dying. Now, she says, whenever people are found in the rubble, they are “already dead and starting to decompose.” 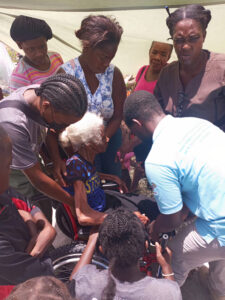 Many survivors either lost their homes or are afraid of staying in structures that may fall on them due to the continuing aftershocks. This means that hundreds are sleeping out in the open every night due to the insufficient shelters, most without even tents to protect them from the elements. Annabelle met Clarisse, a Les Cayes resident who has two children who described her family’s situation. “Our house fell with the earthquake, we lost everything. Now my little kids and I are sleeping out in an empty lot with other neighbors who also lost their homes”, she said. Clarisse has nothing to feed herself and her children with, but the group of survivors where she is staying has formed a committee. “Whenever a person or an organization comes in to help, the committee receives it and distributes it to everyone.” Groups like these have popped up across the city, with people organizing to help themselves and their neighbors to distribute supplies as donations begin to arrive.

Tropical Storm Grace hit Haiti while Annabelle was still in Les Cayes, making a bad situation even worse. She described the storm while it was still happening. “The wind whistles very strongly, the rain falls with great force, which was difficult for those who sleep in the street since it has caused flooding. This affected the mission because we tried to sleep in our tents last night, but because of the storm’s flooding, around 3 am we had to go sleep on chairs in the reception of a hospital, which was difficult for us,” she complains.

Annabelle’s group provided donations to some groups like these, as well as to shelters, clinics, and hospitals in the city. Many of their donations were bought locally. “We went to the market to buy food in large quantities so that everyone could eat,” she remembers. The damage to the water system means that staying clean is difficult. To help with this, the volunteers offered hygiene kits to residents. These kits included items like a toothbrush, toothpaste, soap, sanitary napkins for women, children’s supplies and clothing, etc. They also made bulk purchases of water and food to distribute to survivors. The students collaborated with local health institutions like the FONTEN therapy clinic and the Brenda Stafford Hospital to distribute needed supplies. Medical supplies are in short supply in Les Cayes, so they made dressings that went into first aid kits they gave to the nurses at the Brenda Stafford Hospital who were lacking in medical supplies.

Since medical care is lacking for the large number of many people who need treatment, the students also helped to treat the wounded. “There are many injured people here,” she says, “some got hurt because of a wall, a tree, or other things that fell on them during the earthquake.” She adds that “we have received a lot of patients today, we gave them therapeutic care and treated their wounds. We were able to treat those in pain and offered devices when needed.” Annabelle realizes that many of the injured will need long-term care to finish healing. “I am an occupational therapist and other students are physical therapists,” she says. “We already know that in the days that follow, we will receive many patients seeking medical follow-up, for therapeutic care.”

When asked what are the most critical needs of the people of Les Cayes, Annabelle pauses before answering, “The main things people need are hygiene kits and water. Also, they need tents to sleep in. Many houses collapsed in the earthquake, so many now are forced to sleep in the streets because they do not have any shelter.”

There are a lot of people of Haiti who need immediate help to get through this difficult period. Your donation can provide food, shelter and medical care to the victims of these natural disasters. Please donate today.