Josué Aarón Henríquez is a young man who is in his first year of service. He is originally from San Jerónimo, a farm town with a population of around 48,000 near Nicaragua’s Caribbean coast. The area’s main crops are plantains and bananas, which are exported to Honduras and El Salvador. Hurricane Iota, one of two Category 4 hurricanes that struck Nicaragua in late 2020, destroyed many of the crops around San Jerónimo.

Larger and starchier relatives of the banana, plantains are a staple food in much of the tropical world. Though Josué’s family does not grow plantains, they do know a lot about how to grow them, since his parents and siblings work on plantain farms. When Josué joined NPH Nicaragua, he never imagined that thanks to NPH one day he would be helping to grow their plantain and banana crops.

San Jerónimo lies within the state named North Caribbean Coast Autonomous Region, which covers 33,105.98 km², and forms part of the Mosquito Coast that borders into Honduras. The town itself is a remote indigenous community, famous for the Miskito culture. Being far remote from other communities in Nicaragua, the town’s nearest trade partners are based in Honduras, with whom they sell milk and plantain, meaning the populace of the town prefer to trade amongst themselves in the Honduran Lempira currency rather than the Nicaraguan Córdoba. Located deep in jungle terrain, the population of the town must walk a day or so to reach an area with medical services. San Jerónimo on the River Coco, almost 15 hours away by road from Casa Padre Wasson.

“I am from an indigenous Miskito family. We speak Miskito together; I only spoke a little bit of Spanish when I came to NPH,” says Josué, proudly. “I grew up in a wooden, three-room house with my four brothers, two sisters, and parents.” 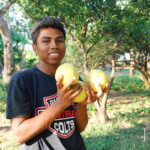 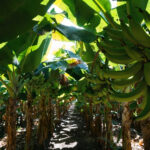 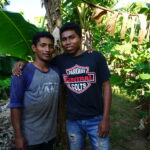 “I joined NPH Nicaragua in 2015 when I was 12. I came from a loving family, but it was difficult for my parents to care for me. They didn’t have the economic resources to send me to school or even feed me. They love me and they didn’t want us to be apart, but they felt receiving a formal education and have a better nutrition was more important for me. They wanted to give me an opportunity that they found difficult to provide.”

Josué’s father took his son and two nephews Jiffer and Jemsley to a local community after hearing about other children there who were living with NPH Nicaragua. At the time, a local evangelical pastor there worked alongside NPH in remote places such as the San Jerónimo area, where there is a lack of access to education and health services, as well as high poverty levels. The pastor then referred Josue to NPH Nicaragua, who would then be able to progress.

Josué admits that it took him time to adapt to being far away from his family, but he was taken in quickly by the NPH Nicaragua family, while always being encouraged to stay in contact with his roots. However, with NPH, he also found opportunities to develop new skills. One of these is a love of learning English. “It was my favorite class in school, and whenever visitors came, I would try to practice speaking with them in English, and in return, I would teach them Spanish or Miskito,” he smiles. “NPH Nicaragua like us to continue to embrace our indigenous roots. We also teach other children and it enables us to make friends.”

In 2021, 18-year old Josué began his year of service youth program in the farm with Jiffer and Jemsley. As part of their studies, they have learned how to raise chickens and pigs, as well as improving their plantain cultivation skills.

A profitable food source that flourishes in Nicaragua

Plantains are one of the most important crops grown in Nicaragua, with much of its production being sold to neighboring countries. Nicaragua’s largest plantain growing area is the department of Rivas, along the shores of Lake Cocibolca (also known as Lake Nicaragua). The rich volcanic soils, plentiful rain, and an agricultural infrastructure geared towards the plantain industry benefit the production and marketing of plantains grown on NPH lands in this area.

Currently, NPH Nicaragua is growing around 5.6 hectares of plantains between its fields at Casa Santiago, on Ometepe Island, and Casa Asís, in nearby San Jorge, a lakeside port. Josué says, “Plantains are most productive in a humid tropical climate, where temperatures stay above 24°C (75°F). Plantains normally produce fruit for 11 to 12 months, with new shoots always growing as replacement plants.”

Plantains require lots of water, but since the NPH farms are in the rainy Lake Cocibolca region, providing them with regular irrigation is not difficult.

NPH Nicaragua uses 60 percent of its plantain production as a part of the diet for 268 youths and 33 staff at its homes. The remainder is sold to the local market, an important source of revenue for NPH. Plantain sales raised nearly US$5,000 in 2020, which freed up money for other needs during a pandemic year filled with many unexpected expenses and increased prices.

Plantains are widely eaten in the tropics, from Africa to India, Southeast Asia, and much of Latin America. The fruit of these leafy, tree-like plants are an important source of carbohydrates and provide key nutrients for the youth at NPH Nicaragua.

They contain vitamins A, C, E, and folic acid. They are also rich in minerals like potassium, magnesium, iron, selenium, zinc, and calcium. These nutrients provide benefits such as improved blood circulation, the prevention of anemia, enhanced memory, and better recovery from physical activities, among others.

Plantains can be eaten in countless ways, depending on the culture. They serve the role that rice, potatoes, and wheat play in other cuisines. In Nicaragua, NPH uses several local recipes to include them in the children’s diet. Some favorites are tostones, salty golden chips made from fried green plantain slices, and empanadas, sweet plantain dumplings stuffed with melted cheese.

Josué says that besides enjoying his classes about plantain cultivation, he really enjoys eating them. His preferred plantain snack is tostones with cheese and chopped vegetables. Though Josué says he does not plan to study agriculture, he admits that one day he may wind up growing his own plantains, since they are such a basic part of the Nicaraguan diet and play an important role in his country’s economy.

“I love my country, but also agriculture and my culture. I have gained many sustainable skills through NPH, and I would like to combine them through business. One day, I would love to support the people of my town, and I have the technical skills to do so, thanks to NPH,” Josué concludes.