Helping the Most Vulnerable Populations Since 1954

Thousands of Children Have Grown Up in the NPH Family

Nuestros Pequeños Hermanos (Spanish for “Our Little Brothers and Sisters”) cares for poor and vulnerable children across Latin America and the Caribbean, including: Mexico, Honduras, Haiti, Nicaragua, Guatemala, El Salvador, the Dominican Republic, Peru, and Bolivia. We provide a loving, secure environment for thousands of children, plus education and family support services for thousands more.

Through prevention, protection, and preparation, we provide unique services for children and their communities, helping to break the cycle of generational poverty.

children have been raised in NPH's 9 homes since 1954

children receive an education with support from NPH each year

of NPH college graduates were women in 2020

services provided to children and families in local communities in 2020

Inspired by Christian values, we strive to create a loving and safe family environment for vulnerable children living in extreme conditions. Through comprehensive education, healthcare and spiritual formation, we give children the opportunity to develop their potential, shaping better futures for themselves, their families and their communities. This is our mission.

Our vision is a world without poverty where all children develop their unique potential becoming productive members of society serving their community.

NPH is guided by the five core values:

Our deliberations, interactions, and decisions are founded on the Christian principles of “as you did to one of the least of these My brothers and sisters, you did it to Me” and “Lord, make me an instrument of Your peace.”

These principles guide our actions in reinforcing the rights and responsibilities of children as expressed through:

“A child is only good because of somebody.”

Helping the Most Vulnerable Populations Since 1954 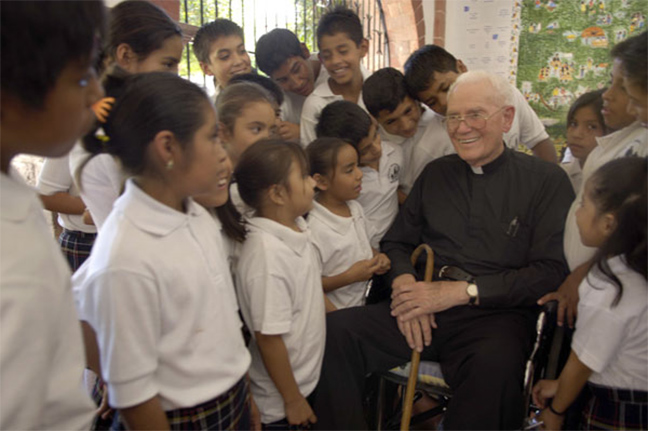 As a young man, William Wasson studied to become a priest. He received a master’s degree in law and social sciences at San Luis Rey University, Santa Barbara, California. Before he could be ordained, he learned he had an issue with his thyroid and upon discussion with the Bishop, it was determined he was not physically fit for life in the priesthood. To help with his disappointment, his father decided William needed a rest and gave him a $100 bill to go south to Mexico. William planned to stay only a week or two but changed his mind after falling in love with the community. He found a job and enrolled in a course in Mexican history.

After a year, William began teaching criminology at the University of the Americas and working as a counselor at the American School Foundation. He continued to attend Mass every day.

One of his teachers from the seminary in the United States, a Benedictine Monk, came to visit William and asked him an important question, “Do you still want to become a priest?” When William said yes, the monk took him to visit the Bishop of Cuernavaca who asked him for a letter about his condition from his doctor. The Bishop needed priests and if William could do the work, he would accept him.

William was ordained a priest in 1953 by the VII Bishop of Cuernavaca. He was assigned to a church in the Tepetates market district of Cuernavaca called “The Church of the Poor” and rented a small apartment nearby. Almost immediately, he instituted a daycare center for poor children.

One morning as he entered the church, the sacristan who lived above the church came running down the aisle to meet him. He explained that a thief had robbed the church’s poor box the night before. In Mexico, nothing could be worse than being a “church thief.”

That afternoon, the sacristan again came to Father Wasson with news that the thief had been apprehended and was in custody. Father Wasson was to go to the jail to fill out the paperwork.

Upon entering the police station, he asked if he could meet the thief. To his surprise, it was a 15-year-old boy with a tragic situation who explained to Father Wasson that he had stolen the money because he was hungry.

Unwilling to press charges, Father Wasson went to the judge on the boy’s behalf. He had made the boy promise to attend school if he could obtain his freedom and the judge granted custody. The boy would live with Father Wasson for the next four years, attend school, and be the first pequeño of NPH.

Within a week, the judge had sent eight more orphaned boys to Father Wasson. With his growing family, he decided to rent an old, abandoned house, asking a parishioner to pay the first month’s rent. He found used beds and took what he could to provide a home for the children. To eat, Father Wasson solicited local hotels to donate their leftover soup each evening.

In time, Father Wasson would open the home to more children. As his home grew, so did his needs. He began to travel and talk with people in his home state of Arizona, telling stories of the children. He asked for donations to help him with his work. Father Wasson believed the best way to get people to help was to touch their hearts.

Father Wasson’s achievements reflected a combination of life lessons and an idea put into action. He credited his core drive with a foundation developed during his own childhood.

Born on December 21, 1923 in Phoenix, Arizona, Father William Wasson grew up with parents dedicated to serving others. They assisted in helping delinquent children at the Jamison Farm in Arizona. The family often distributed food and clothes to the poor in neighborhoods outside of Phoenix. They took in children who had no place to go, offering them their home.

Father Wasson recounted, “I don’t remember when I began to understand the work of my parents as a religious deed, but I guess it must have been the day I found myself personally interested with a delinquent child. This was the first time that I really felt interested with someone to the extent of feeling like their problems were mine.”

Father Wasson recognized the gifts his parents had given him and wanted to ensure the children under his care would enter the world ready to build on the important principles taught in the NPH family.

He dedicated 50 years of his life to serving as a father figure, provider, and teacher to more than 20,000 orphaned, abandoned, and poor children. What started as a gesture of love grew to an organization dedicated to changing the lives of children in Latin America and the Caribbean forever.

Father Wasson created the NPH family with four foundational principles—love, sharing, work and responsibility. Through drive and determination, he expanded his homes to nine countries, leaving a lasting legacy that would change the world forever.

Today, NPH homes still practice the foundational principles of Father Wasson. His philosophy for raising children directly impacted his unimaginable success at transforming the lives of children; creating leaders in their own countries.

“Truly I tell you, whatever you did for one of the least of these brothers and sisters of mine, you did for me.”

LET NPH HELP YOU WITH YOUR CSR
We use cookies on our website to give you the most relevant experience by remembering your preferences and repeat visits. By clicking “Accept All”, you consent to the use of ALL the cookies. However, you may visit "Cookie Settings" to provide a controlled consent.
Cookie SettingsAccept All
Manage consent